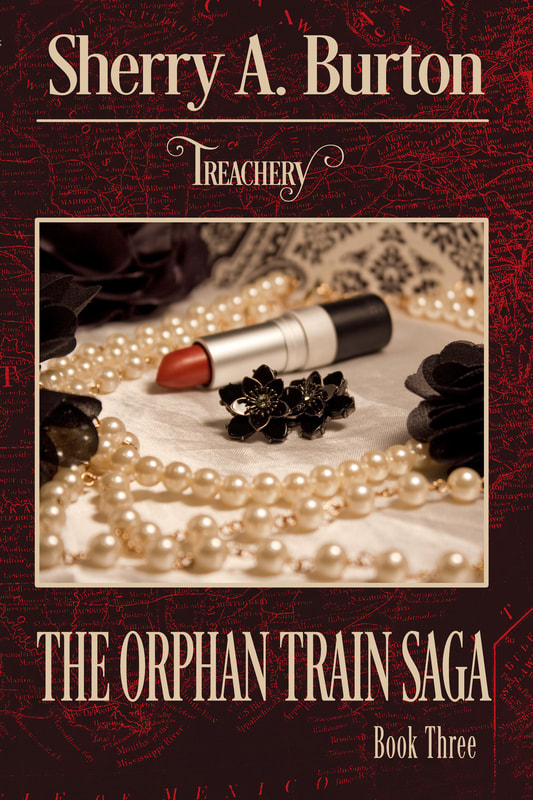 The Orphan Train Saga continues with Treachery, Book Three, Anastasia’s story. After an arduous childhood, fraught with poverty and a contentious relationship with her parents, Anastasia finds herself thrust out of her home and living on the streets of New York City.
Not wishing to be listed among the city’s ever-growing homeless children population, Anastasia lies her way into being sent out on an orphan train, a trip that will set her on a turbulent path few would be able to recover from. Will Anastasia find the happiness she so desperately seeks? Or will she be forced to accept the dark cloud that has shrouded her childhood?
Excerpt From Treachery


When I was first asked to write a journal, I didn’t think I would have anything worth saying. Who’d want to read something from the likes of me? I promised I would try and that I would be truthful. I found the latter to be most difficult, as the truth has a way of escaping me. Still, I wanted my story to be accurate and knew no one would read my words until after all breath had left my body, so I agreed to lay the words down on paper. If you see water marks within my words, never fear; I’ve shed many a tear in recounting my past. I’m not saying that to gain your pity; I am merely telling you some things in my past are not remembered without sorrow.
I am not a Christian woman, nor have I ever claimed to be. If that statement gives you pause, I ask you to remember the times in which I have lived and read my words before casting judgment upon my character. If you’ve never gone to bed hungry, fell victim to a wicked man’s lust, or never had your newborn child torn from your arms because you had nothing of value to offer it, then I say you are not fit to stand in judgment of me.
I was nearly ten when the man who married my mother entered my room and exposed himself to me. Terrified, I pulled the covers over my head. When I grew brave enough to look again, the man was gone. His early forays into my room were much the same: he’d enter, I would hide under the blankets, and within moments, he’d be gone. At first, I kept the man’s indiscretions to myself, fearing my mother would be angry. One morning, I approached my mother, telling of the man’s visit. Instead of taking me into her arms and comforting me, her eyes narrowed, and she slapped me across the face for telling lies. Later that day while with my mother in the market, I watched in stunned silence as she spent some of the food money Father had given her on a wedge of wood. I remember it clearly as she haggled over that wedge for several minutes. I couldn’t understand at the time why it was so important for her to purchase that worthless piece of wood. Once home from the market, she put away the market purchases and then motioned for me to follow as she led me to my bedroom. Taking the wedge, she showed me how to jam it under the door to prevent anyone from coming into my bedroom without my permission. That was the only present I received on my tenth birthday. In truth, it may have been the best gift I ever received. I cherished it even more, as I knew how much it cost my mother. Not so much in terms of monetary means, but in that the man knew it was she who prevented him from reaching me. She who paid the physical price for keeping him away. The beatings he gave her grew worse. The screams that leaked from the walls of their bedroom tore at my heart. More than once, I woke to the sounds of the man jiggling the doorknob, followed by the tormented screams from my mother’s room. I knew I had the power to relieve her pain if only I had the courage to open my door. I did not. And so her screams continued. Daughters should not be held responsible for their mothers’ tears, yet the guilt resides in me to this very day.
​      If what you have read thus far did not scare you away, then I guess you are capable of hearing what else I have to say. My birth name is Anastasia Charlotte Millett. This is my story.